Honeybees are Modern-day Canaries in the Coal Mines 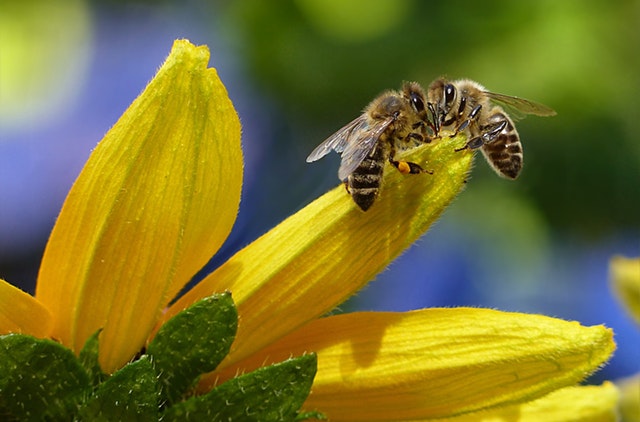 Throughout the history of mankind, mining for metal ores has played an important role in our development, as it is the processing of these metal ores into useful items that have allowed us to develop as a society called the human race.  Funny, it is these same metals that also play such a pivotal role in our health and that we liquefy in order to provide you with highly bio available mineral supplements.

Mining is and always will be a dangerous profession. Besides cave-ins, the next most dangerous aspect of working deep underground was the slow diminishment of oxygen or contamination of the air in the mine with toxic gasses. Early on, a simple method was used by the miners to tell them whether or not they were running out of oxygen.  A canary was put in a cage and carried with the miners as they did their work.  If the canary passed out, it was time to get out of the mine.

Today, we have other pollution problems topsides that pose dangerous health risks to us.  A particularly onerous, but almost imperceptible one, is the slow accumulation of pesticides, herbicides, and fungicides in our environment. This has happened so slowly that we aren’t able to see the damaging results fast enough to recognize what they are really doing to us. Fortunately, or unfortunately, however you may look at it, we do have another canary in the mine. It is our ubiquitous and invaluable insect friend, the honeybee.  Continue reading to find out how.

Honeybees are the Modern-day Canaries in the Coal Mines
By Dr. Reese Halter
Over the past three years, more than 50 billion honeybees have died. Scientists understand the causes and now we need everyone to lend a helping hand. The humble honeybee has been inextricably linked to humankind since prehistoric times — at first we were drawn to this remarkable creature because of its sweet honey.

Honey is to a bee what electricity is for humans — energy. One teaspoon of honey weighing 21 grams contains 16 grams of sugar or 60 calories, and it took 12 bees their entire foraging lives, combined flying time of about 6,000 miles, to produce 21 grams of honey.

To understand the importance of honeybees, consider that every third bite on your plate is a result of their primary role on the planet as pollinators — the most important group on Earth.

Honeybees contribute at least $44 billion a year to the U.S. economy by pollinating crops such as almonds, apples, avocados, blueberries, broccoli, canola, carrot seeds, cherries, citrus, cranberries, cucumbers, grapes, lettuce, macadamizes, melons, peaches, plums, pumpkins, onion seeds, squash, sunflowers, kiwis, tomatoes and zucchinis, to name a few; alfalfa and clover for beef and dairy industries; cotton for our clothes; honey, candles and medicines. Bees have been on the planet for more than 100 million years, or about 14 times longer than the first human progenitor.

The American Red Cross estimates there are 80 to 120 million land mines in 70 countries and 40,000 new land mines are being deployed weekly. Each year these brutal weapons of destruction maim tens of thousands of children. Researchers from the University of Montana are using bees to find TNT residue — the primary ingredients in land mines — while conducting surveys many miles away from the hive.

Many blue-chip corporations depend on the honeybees for their products including Häagen-Dazs ice cream, Starbucks coffee and Clorox’s Burt’s Bees, a specialty personal care company with more than 150 products. A combination of factors has collided to create the perfect storm responsible for memory loss, appetite loss and autoimmune system collapse, resulting in the rapid decline in honeybee populations worldwide.

Each year, 5 billion pounds of pesticides are applied globally. Many of them are neonicitinoids, a nerve poison that prevents acetylcholine from allowing neurons to communicate with one other and muscle tissue. In humans, it would trigger Parkinson’s and Alzheimer’s.

Imidacloprid (one form of neonicitinoids) is manufactured by Bayer under the trade names of Gaucho and Pancho; it killed millions of bees in France before eventually being banned in that nation, yet it’s still used widely throughout the U.S.

Research from Europe shows that bees exposed to electromagnetic radiation from cellular towers made 21 percent less honeycomb and that 36 percent, taken a half mile from the hive, were unsuccessfully able to navigate home. In 2006 the honeybee genome was decoded and their genetics revealed only half as many genes for detoxification and immunity compared to other known insects. Scientists found specific “good” bacteria inside their stomachs and intestines crucial for fighting pathogens and digesting the silica casing around each pollen grain, providing access to its protein.

Bees evolved to feed on a wide assortment of pollens but today we use them in monoculture fields. Pollens provide their only source of protein. Proteins grow eggs, larvae, brains and autoimmune systems.

The abnormally high temperatures of 2006 were likely the tipping point for bees in North America. The searing springtime temperatures during the onset of flowering are believed to have caused sterile pollen in many plants. Sterile pollen produces little if any protein.

In 2007, almond, plum, kiwi and cherry pollen that were tested exhibited little if any protein content. Infertile soils lacking essential nutrients, bacteria, fungi, protozoa along with climate change were implicated. Beekeepers around the globe are now feeding their hives a form of a protein shake with eggs, brewer’s yeast, pollen and honey, and other special ingredients.

Clearly, agriculture must reduce the levels in toxicity from pesticides, herbicide and miticides, globally. There is hope on the horizon as organics is the fastest growing sector in the U.S. at $24 billion a year. First lady Michelle Obama has an organic garden on the White House lawn with two honeybee hives close by. Each of us can help by purchasing organic foods and cottons, and supporting local beekeepers by buying organic honey. Do not use herbicides, pesticides or miticides in your yard. Plant a wide variety of native yellow and blue flowers and participate by helping scientists in the U.S. National Phenology Network.

Without the bees, we cannot survive.

About the Author:
Dr. Reese Halter is a conservation biologist at California Lutheran University and founder of the international conservation institute Global Forest Science.